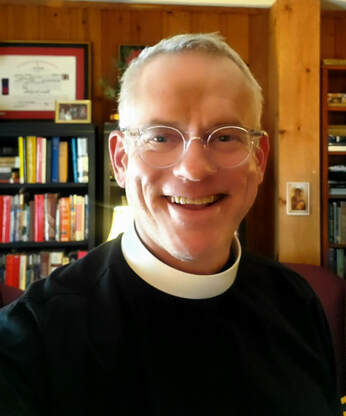 The Rev'd Stephen Batten began his ordained ministry at Trinity Church in the summer of 2018 following his graduation from seminary.  Stephen was ordained presbyter by The Rt Rev'd Robert Skirving on December 16, 2018 at the Church of the Advent in Williamston, North Carolina.  After a twenty year career as an immigration attorney in North Carolina, Florida, Louisiana and Mississippi, he attended the Virginia Theological Seminary in Alexandria, Virginia and graduated with a Master of Divinity degree on May 17, 2018.  He currently serves as the Rector of Trinity Church.

Stephen was born and raised in Williamston (Martin County) North Carolina, the son of Welch and Jeanne Batten and attended Martin County Public Schools.  His Bachelor of Arts (Religion/Islamic Studies) was awarded in 1989 by Duke University and his Juris Doctor was granted in 1993 by The University of North Carolina School of Law in Chapel Hill.

Prior to seminary, Stephen was active in several ministries of The Episcopal Church and the Diocese of East Carolina including six years on the board of directors of the National Episcopal AIDS Coalition; as a legislative aide to the Constitution and Canons Committee of the 78th General Convention of the Episcopal Church, Parliamentarian for three diocesan Conventions (East Carolina), and as a member of the diocesan Constitution & Canons Committee.

He can be reached by email at rector@trinitychocowinity.org or by telephone at 252.946.9196
Eagle's Wings
Ruth's House